The Maple branch dips and sways with her 46lbs draped across the green plastic swing. She is flying.

She flies circles around and around and around her backyard universe. I sit in my writing studio and try to erase the truth from my eye sockets and heart and brain. I try to still the shudder of shock that keeps me clumsy.

Let her swing and laugh and squeal from the same rope and same branch where her brother tried to hang himself.

I am perched at the end of a hospital bed in the psych ward. A mama bird with warmed-white-cotton wings.

My baby sleeps behind me.

A taller, sturdier branch would have done it. Would have taken him.

I cannot look at him without seeing the bright red ring of not wanting to live around his perfect pale neck. I cannot touch him without feeling the swollen wet jagged flesh of his tender wrist held tourniquet tight in my hand in the dark of the darkest night.

He cries on the floor while I dial 911 and says over and over “what did I do wrong?”

3 police cars and an ambulance drive slowly up our gravel driveway. I open the door and say “He is not dangerous. He is sad.”
My living room floods with large men and weapons and whispers and they stand him up with his hands behind his back and he is the softest most fragile thing I have ever known in a single moment. The insides of a crab.

I want them to leave and I want to swaddle him and rock him and take him back to the moment he was born and somehow prepare us both better for this inevitable night. The ambulance drives him back to the hospital where he was born. 15 years catches in my throat like a cough but I am too stunned to push air out so I silent suffocate for a moment as I pull into the lot and prepare to move one foot in front of the other toward him.

I need to be here to be afraid that my teen has ended their life because the pressure to fit into the world as it is has finally overcome them. I need to be here to see them out of the hell. To run, with my fear on fire, and blaze a tunnel to usher them to adulthood – to the softer side of pain where it’s covered in loving something enough to stick through the shit. afraid that because I could not want a man, know a man, or be near a man that I did not create a space where it was safe to be one.

In the summer of my seventeenth year I gave birth to a big, beautiful, healthy boy. A boy who nursed and babbled and cooed and crawled and walked and never tried to die.

My midwife placed him on my chest and said “he’s all yours.” and I believed her.
My flesh grew slowly around his frame. My bones took the indent of him. My belly sunk in to cradle his shape as he nursed, his fingers tangled in my golden blanket of hair.

His sleep-sweat-skin smelled of maple syrup and earth. the sucksucksuck pause sucksucksuck of his tiny little mouth shushed me calmer and calmer until I only ever felt safe enough to sleep if his breath was against me.

When I would sleep walk, he would wake and drag my pink blanket to wherever I had landed. He would lay his little toddler body across mine, claiming me.

He never wanted. Never Wandered. He stayed strong, and stoic by my side until the day my daughter almost died for the first time. The day he watched me stutter and slide down a wall. He watched as I never stood up inside myself again.

I follow my son, his thirteen slender and spiraling years a step before me up the ladder into our neighbors pool. I see the baby soft white flesh of his lower back. I see the stripes of skin stretched plum. Too much growth. Too fast. Baby to man like a bee sting. Stretch marks on the boy child that stretch marked me.

My little blonde crab is growing and one day he will leave me.
He is the stuffing to my hide. He is the beating heart in next room over that says we are safe. He is the boy who electrified me. He stopped me. He started me. The one I loved first and always most because he got all the rest of my kid love. My childish adoration.

He is the only one I can feel in the world. Miles away – I can close my eyes and match his breath.

I remember the day he spilled over and pulled up his pantleg and sputtered out a question
“Why do we do this, Mama?”

The scars- they scream into me. And in my brokenheartbrain I keep wondering if he uses the same pink pocket knife that I did.

Now my arms reach up to hold him. My head tilts back to see his ocean eyes. I cannot find his laughter. I follow my ears to him and he is quiet, still, and covered in his bed.

I follow him now with hands full of memories that prove I was there. I throw the desperate love of us against the walls and toward his chest and beg him to see it. To touch it. To remember we were real people, once.

I cannot spare him.

Has he suffered me? Has he survived?

Kieran says that as soon as he jumped, he regretted it. Luckily, the tree he jumped from was not strong enough and the branch dipped down enough that his toes touched the ground and he was able to free himself and come for help.

Since that night in August he has been making huge strides toward recovering from the suicide attempt and finding hope in the living world. Kieran has suffered (and has been seen and treated for) depression and debilitating anxiety for a number of years – being in the background of a younger sibling with easily identifiable special needs can not be easy and I urge every one of you reading this to remember the kids who aren’t demanding your attention – and give it to them even when you think you don’t have it in you.

Do not shake your head or throw up your hands at teenagers today – look at the world they are growing up in! Look at them, even if they don’t look you in the eyes when you are talking – talk anyway. Love them back into the world.﻿ 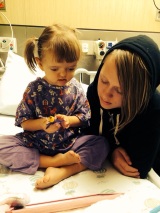 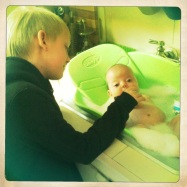 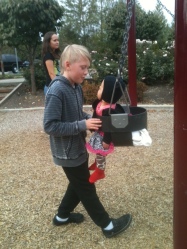 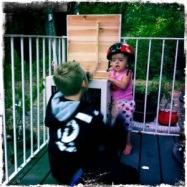